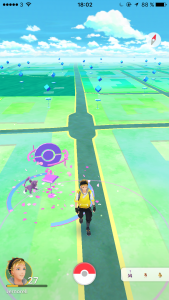 A while back I wrote a longer piece on how to design a market system within the game Pokemon Go, and what aspects that I think will determine what the effects will be when the update comes. In this second blog post about economics related to the game I discuss how society in pokemon universe would be like. And what could be an awesome way to development the game further!

Let’s imagine living in a world with pokemons, very intelligent animal-like creatures with sort of super power. It does not appear to me why having them fighting each other would be such a huge thing in this world as the pokemon games make it appear. Sure there are humans forcing animals fight each other for our entertainment in our society too. But one can hardly claim it’s a big thing in the developed parts of the world. Since pokemons are intelligent enough to understand human spoken language and express emotions I doubt the practice of having pokemons fight to exhaustion or death wouldn’t engage movements fighting for pokemon rights.

From an economic standpoint there is a lot to gain from trade with pokemons, trade defined as voluntary transactions from both parties. Or if the enslavement would persist: having them do more productive tasks. The pokemons might lack the intelligence to comprehend the concept of trade, like most animals in our world. In any case, there might not be any moral reason to treat pokemons differently than we treat other animals, as property.

We see in the pokemon movies and tv-series that there actually are a lot of work that can be done by pokemons. For example there are pokemons who work as nurses in hospitals, assists with transportation services and deliver mail. Since a lot of pokemons possess supernatural abilities such as being able to create fire, electricity or poison etc. there is in fact big gains in employing pokemons to stuff that humans can’t do or do at a high cost.

Perhaps my observation sounds obvious, so let’s go into how employment for pokemons could create an interesting dynamic element in Pokemon GO. In the game there are places called Pokestops where players can receive free items such as pokemon balls and medicines. Instead of giving out these items for free, imagine these depots instead offered players quests to complete in exchange for items. Perhaps at a poke stop, the player meets a human asking for help with a task, say, building a wall or fishing for food. The player can then lend one of it’s pokemons to the person in need for an amount of time. Building a wall or carrying heavy thing might call for a strong pokemon while for fishing you might want to employ a water pokemon. Depending on how skilled and fitted for the task the pokemon is, the player is paid accordingly.

This would give players a reason to gather good pokemons of different elements and with different abilities. As the game looks today, the only reason to gather strong pokemons is to build a strong compating team, and for that task there really is only a handful of pokemons that are really valuable. I would say this is a fairly simple element that would make the game more dynamic and interesting for the players. Hopefully some game developer from niantic sees this post and makes it reality.